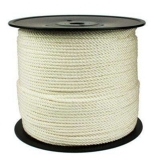 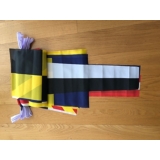 Nautical Bunting (SRP £25.00) from £25.00 Nautical Flag Bunting Complete with 40 internationally recognised signal flags including the 26 alphabet flags and 3 answer and 0-9 numeric.  100% polyester.  Length: 12.6 metre.  Our large size bunting is 25 metres long.  All the flags vary in size because they are all different shapes.   Nautical Bunting    We have for sale  two sizes of  nautical bunting - regular and large. This nautical bunting comes in two lengths, the regular size is 13  metres long with 40 flags sewn onto the dress line The large size is 25 metres long with 40 large flags. Nautical bunting is used to decorate  boats, docks, ports, homes and gardens as well as  seaside shops and at maritime events on shore to give a nautical feel. It can also be used to decorate a room for an ocean theme. The nautical bunting comes with 40 flags including the 26 alphabet flags  in the signal code that is used internationally by people to communicate between ships at sea. Check out our related products such as Sewn Ensign Here Military Flags Here and hand sewn nautical flag sets and individuals sewn sets click Here. Check out our related products below  Add to Basket 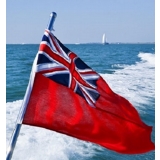